I know. It sounds ominous, but really it’s not. There might be a couple more, but this one I have partaken in recently. My favorite, or at least one of them, form of torture is puzzles. I love putting puzzles together. I have to be careful when I start them though, because once the bag is open and the pieces are on the table nothing much else gets done.

Usually I buy one every Christmas. I wait until the house is ready for company and then the bag is open. This way I can share my fun with my family. This includes my boys, husband, sister, her family and my parents. It’s very hard to walk by a table with an unfinished puzzle and not look at it. Then you find that one spot that screams “This will be easy!” and spend the next ten minutes looking for that one piece. From there it’s usually down hill. With this last one it was late in the night, I get up around 5:30 am and if I don’t get my sleep I’m useless the next day. So finally I had to reach over and just turn the light off. If I can’t see it, I can’t do it.

This year was a bit different. I bought the puzzle, but was unable to open it because we were working on the house. Had to put the new flooring in so the dining room had something more than plywood. Kind of hard on the bare feet in the morning. So the puzzle was not opened until a few weeks ago.

My youngest helped me some. He actually likes puzzles to a point. My husband told me if I needed the “Puzzle Master” just let him know. This means when I get down to the last five pieces that he is willing to come in and finish it for me. *rolls eyes* So the fun begins. 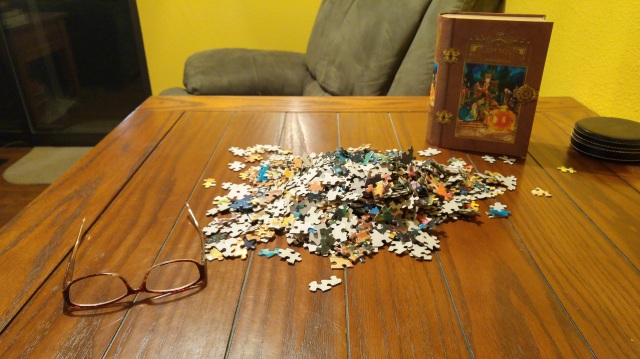 Usually the puzzle is 1000 pieces. Otherwise they are done too soon and so is the fun. Everyone has their way of doing puzzles. Some put the same colors in the same pile, others just make sure the pieces are all turned upright. I like to start on the border. Sometimes that works, sometimes I have to move on to another section and work on it for a while. This one was one I had to do the latter. But finally the boarder was done along with a couple of the main pieces. 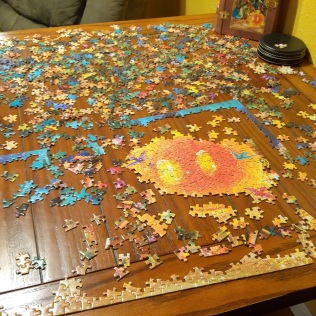 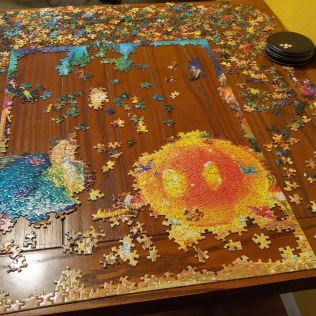 I do cheat a little. If there are pieces that are still hooked together when I open the package I keep them together. A little help from the manufacture never hurt. 😉

So about a week and a half later, with the only thing getting done when I was home from work was laundry and dinner, the puzzle is done. 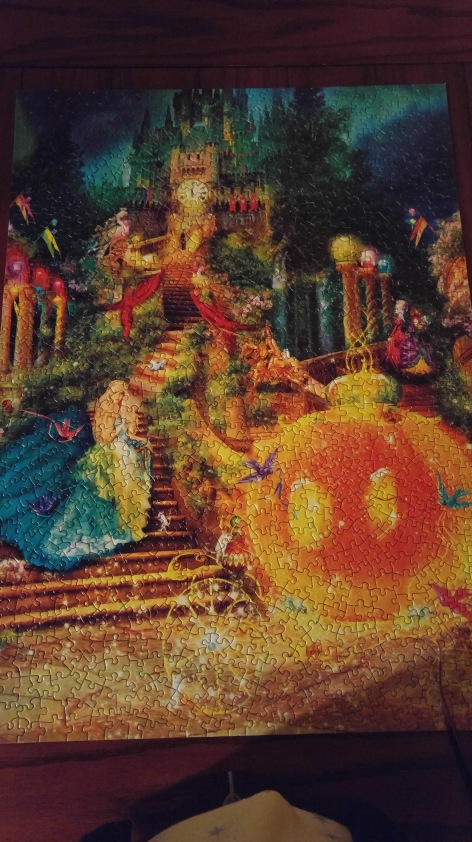 My son helped me with the last. It became a race to see who would find the next piece and then who would put the last in. I put the second to the last in and started to look for that finishing piece. It was no where to be found. Frowning I looked at my son who was grinning like the Cheshire Cat as he reached down to the hand that was on his lap and pulled the last piece of the puzzle from it. The little twit (edited for those younger ears) had hidden it so he was the one to put it in! Grrrrr!

Usually by the time I’m done with the “Christmas” puzzle I am good until next year. Apparently it is not so this year. While I will keep this puzzle on the table for a week or so, I have bought my next one. This time it is 1500 pieces. Oye! It will wait though. Even though I have this week off for spring break, I have a lot of yard work to do. If I open the puzzle that won’t get done. So maybe later in the summer. Here is a sneak peak of what new torture I have designed for myself. I think this one is going to take me awhile.

2 thoughts on “My Favorite form of Torture”

Pick Me Up Poetry
Thoughts & Research